Hi, everyone, and welcome back! If you’ve been keeping up with my posts on various sites and blogs, you know I’ve been in a long state of transition as I relocate to the West Coast. I’m thrilled – and muchly relieved – to say that most of the transition has been completed. There is one final – and extremely important – step to take, but it now appears that there is, in fact, a light at the end of the tunnel. I am very hopeful that before the end of the summer, I’ll be able to tell you all about it.

Earlier this year, I posted about my new kitchen, which I love. The house itself is about as old as I am, but the kitchen is very large, with tons of counter and storage space. I also posted about outfitting a kitchen on a budget. This one came about because all of my kitchen inventory was 3000 miles away, and I didn’t know how quickly I’d be able to get it all out here. I was really tired of fast food and such, and I really wanted to cook for myself. So I got just enough stuff to make that happen.

Now, however, I’ve got everything here. I also bought a few new items (LOVE my new knives!) to fill in some holes in my inventory. And that means I am back at the stove, cooking like mad and having a ton of fun. Starting next week I’ll be back to normal, posting recipes and videos as much as possible. For now, however, I wanted to offer some photos (love those phone cameras) of what I’ve been up to lately. Click on any photo to see a full size version. 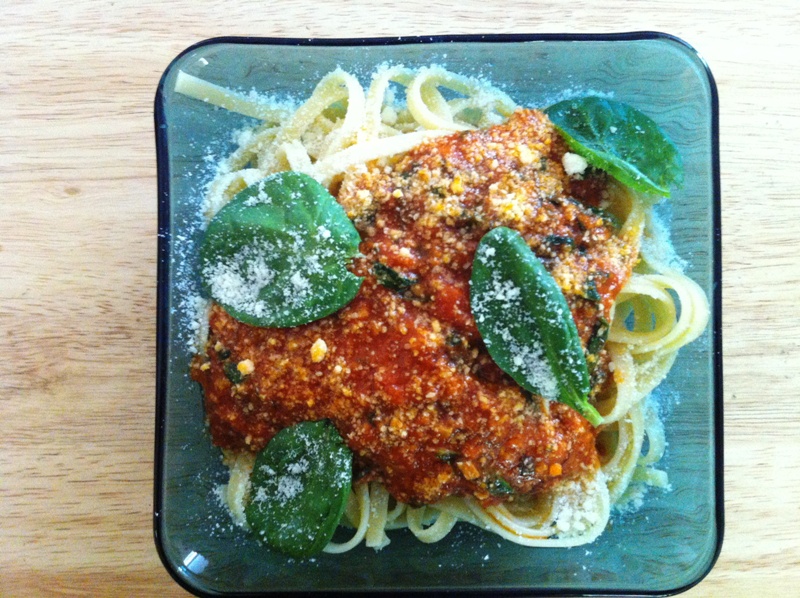 This was one of my first meals in the new kitchen. It’s actually fairly simple, in that I started with a bottled spaghetti sauce (garlic and olive oil). I added fresh chopped basil and Parmesan cheese to the sauce as it simmered. After serving, I added some basil leaves and a little Parmesan for a nicer presentation. It was awesome! 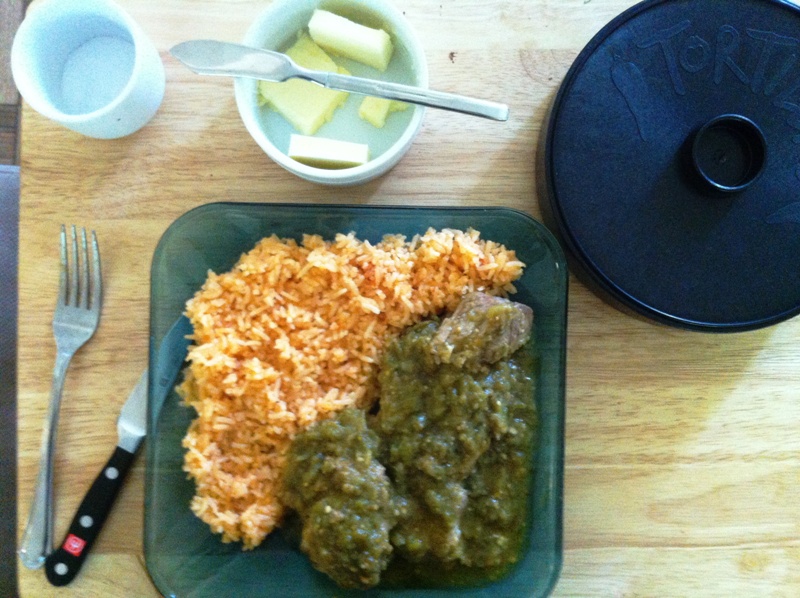 Next up is a variation on Chili Verde, made with boneless Country-style ribs. Because this is a tougher cut of meat, I let it simmer for quite a while to tenderize the ribs. It turned out extremely well, proving once again that you can use cheaper cuts of meat to help save money. 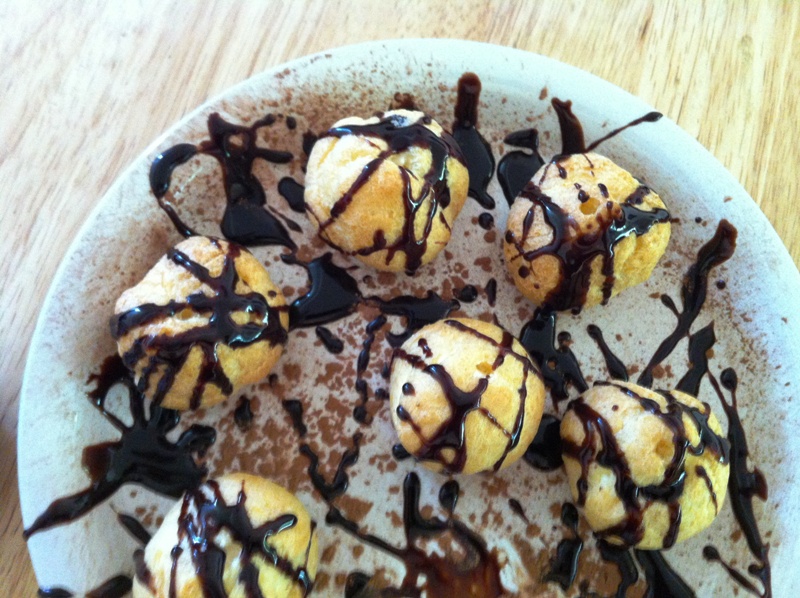 Here’s a very easy dessert idea for when you want to dress things up a little. Look in the frozen dessert aisle of your local store to find mini cream puffs. They’re normally near the pies. All you have to do is to thaw them for about 20 minutes before serving, and they’re really good all on their own. But if you want to impress your date (or anyone else, for that matter), take an extra minute to dress the plate with sprinkled cocoa powder before adding the cream puffs. Then, drizzle some chocolate sauce over the top. Done! 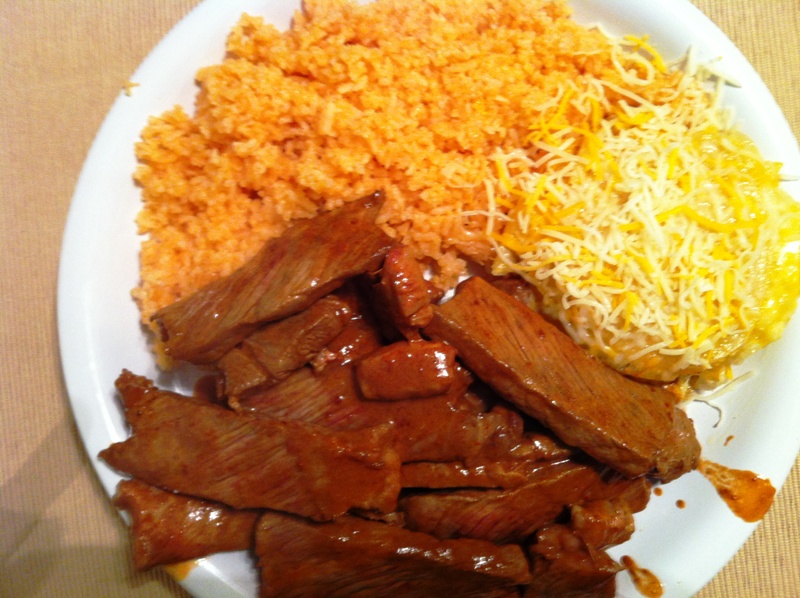 Moving back to Mexican territory, here’s the dinner I served when my good friend and production partner, Polo Jones, came up for a day of meetings. Regular visitors will recognize the Chili Colorado – created with sliced rib eye steak for a more elegant take on this basic recipe. To the right (smothered in cheese) is an Enchilada Stack. (I’ll be doing a segment on this one soon!) 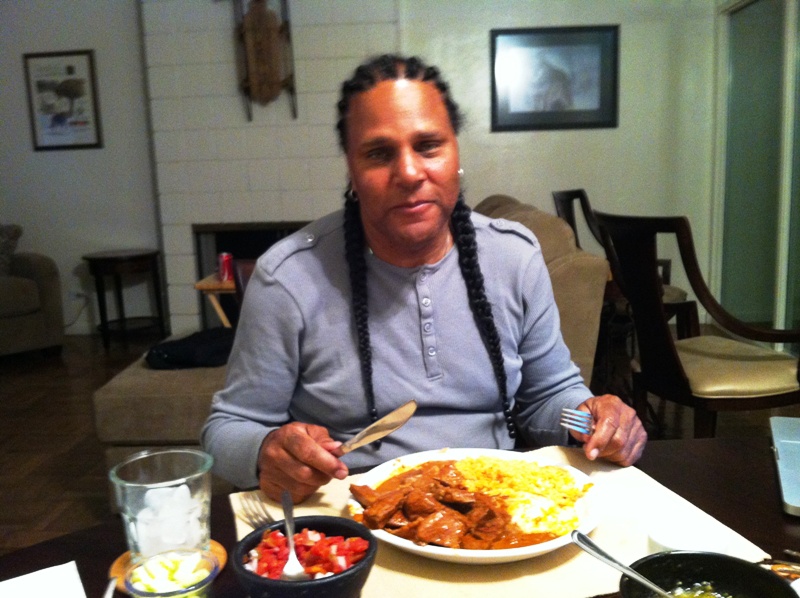 And here’s a shot of Polo just before he digs in. Polo said it was the best Chili Colorado he’s ever had. He also said the margarita was awesome! 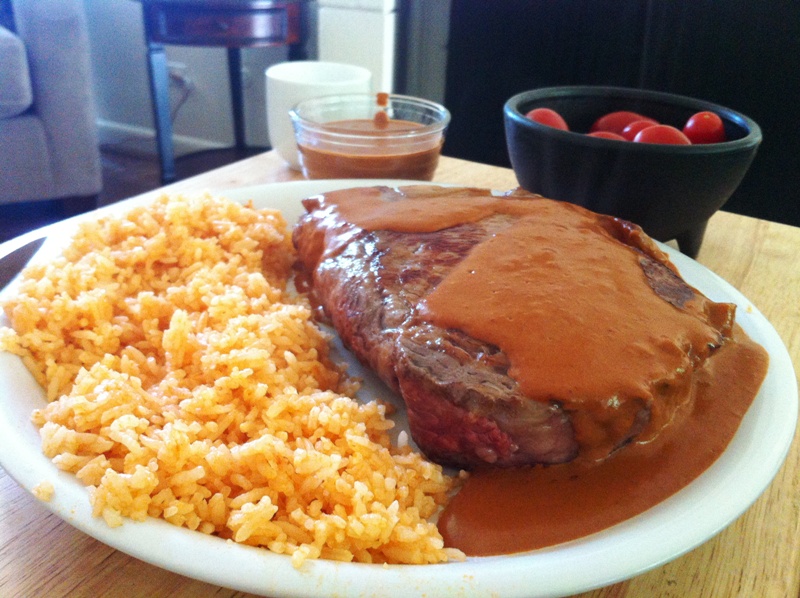 Again, regular readers will recognize this – a big ol’ fat ribeye steak (rare!!!) with a variation of my Colorado Sauce. It’s one of my favorite Mexican style dinners, especially when I’m on my own and need something special. 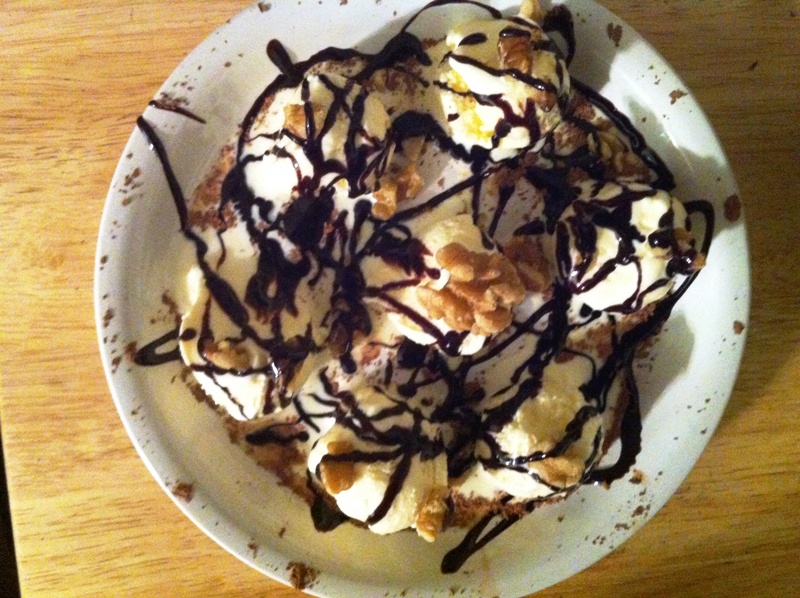 Again, I had some fun with dessert. Personally, I think dessert actually means FUN in some foreign language or another. Inspired by the mini cream puffs, I got myself a melon ball scoop. This allowed me to make very small scoops of ice cream as the basis for a fancy presentation of your basic sundae ingredients. Often, when cooking for someone else, the presentation makes all the difference. Guys, I’m serious! Ladies notice things like this, and they really appreciate the extra time and effort it takes to do something a bit different and special. 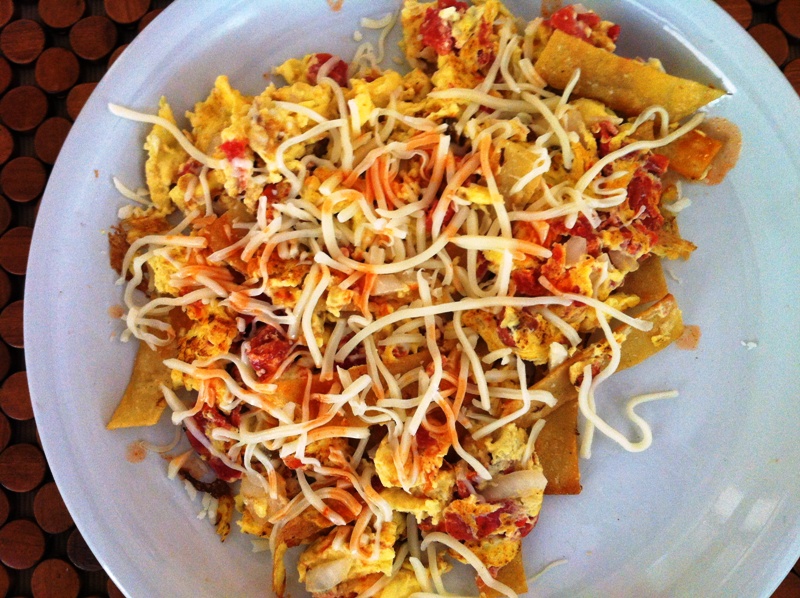 Yesterday, for brunch I made a variation on Huevos Rancheros. It all comes together in a single pan, so it’s not as hard as it looks. It also allowed me to use up some of the leftovers from the past few days. Serve with warm corn tortillas and have some fun! 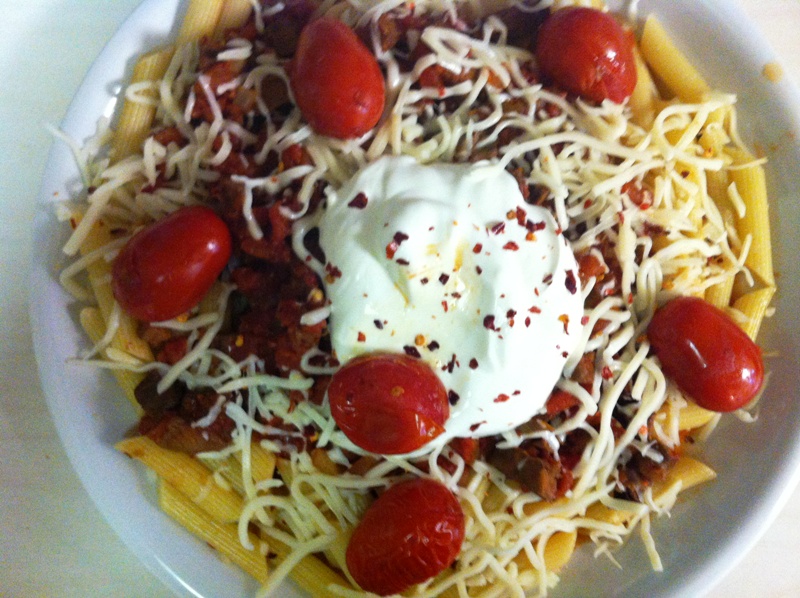 Finally, we come to last night’s dinner – Mexican-Style Spaghetti. Don’t laugh! The idea comes from Mexico itself. In my early teens, my family visited the Rio Grande Valley. While there, our host took us to dinner across the border. My parents told my sister and me that we could order anything we wanted. I saw a spaghetti dish and thought it was pretty cool to mix Mexican and Italian cuisines. When I ordered it, everyone at the table made fun of me, but I held my ground.

I’m so glad I did, because within minutes, a personal chef rolled his cart up and created my dinner right in front of me. And it was awesome! And, no, I didn’t let anyone have a bite – what with all the grief I took for ordering it. Go on, enjoy your echiladas and tamales and all that. I’ll just force myself to eat this awful spaghetti you all told me I was crazy to order. (heh heh heh)

Last night’s version used canned chopped tomatoes and habanero peppers. I then added a bit of my basic Colorado sauce and some leftover chopped tomatoes and onions. I then added some leftover ribeye, chopped into very small bits. Finally, I added the fresh tomatoes. I served this over Penne, keeping the tomatoes to the side for a final addition, along with shredded cheese and a dollop of sour cream.

As you can see, I have been having serious fun the past week or so. The reason you aren’t seeing videos yet is that I’m still spending a large portion of each day unpacking and sorting through things. The good news is that I’m almost done with that and about ready to get back into full swing. You can expect to see new videos on the site by mid-week next week. Until then, try your hand at some of the ideas above and have fun with them. As always, remember to