By
Lane
– Posted on September 7, 2013Posted in: Breakfast, Slow Cooker 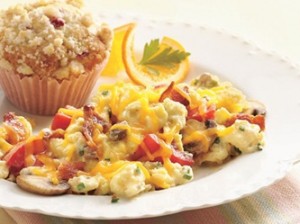 I’ll be honest: I don’t usually eat breakfast. At least not a traditional breakfast. If I eat at all, it’s a bowl of fruit – and I really should do that every day. I find that I feel better and have more energy if I don’t eat a lot in the beginning of the day. My body doesn’t have to focus all of its energy on digesting a heavy meal.

Here’s the problem, though: I absolutely LOVE breakfast stuff. Eggs? Yep! Bacon? Of course! Waffles? Do you even have to ask? And I could go for an hour on the merits of hash browns and the various ways to prepare them. It would take another hour for us to debate which type of breakfast potato was best.

I thank God for weekends, because that’s when I have breakfast. (Or breakfast for dinner, but that’s a whole different thing. Let’s stay on track here.) Weekends are great for breakfast, because we often get up later. And by the time we’re awake enough to use a frying pan without burning down the house, it’s closing in on Lunch O’clock. So we can simply say we’re having breakfast for lunch (which is where “brunch” came from, by the way).

But what about those times when you know you’ll have an entire crowd in the house? For instance, your parents and little sister could come to visit. Or you could have had a really good party the night before and made several people sleep on the couches and floor, because you don’t want them to drive home. There’s even one guy you don’t know sleeping in the tub. (“I’ve never seen him, have you?” “I don’t know; I think he came with Jimbo.”) 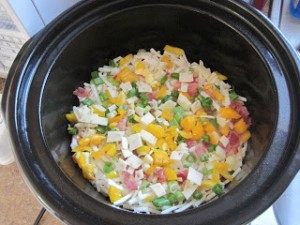 Obviously, you’ll want to feed them something other than beer and leftover pizza. Come on! That was fine for your college days when everything you cooked for yourself came from the microwave or the top of the radiator. But you’re older now. And – supposedly – more responsible… even if you do still like to draw stuff on people who pass out at your parties. It’s time to Man Up! and learn to cook something better!

On the other hand, you don’t really want to spend a ton of time in the kitchen, slaving over a hot stove for friends who have already chosen the absolutely WRONG game to watch on your big screen. You’d much rather be in there with them, cheering on the proper team, on the proper channel.

Enter the slow cooker. With this wonderfully ingenious appliance and a little forethought, you can have an awesome breakfast without lifting anything more than a spoon to scoop it into bowls. OK. Fine. You have to make toast. And pour some OJ and/or coffee. And if you’re really into it, you’ll have to make mimosas (orange juice and champagne… done) or Bloody Marys. But the meal itself will be just fine without your help. Here’s how: 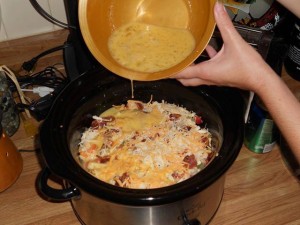 Kick your friends out of the kitchen. This is especially important if there is drinking going on. If necessary, send some beer with them. Just get them out so you can work, and so you don’t end up with Phil’s keys in the slow cooker with your breakfast.

Heat frying pan over medium-high heat. When hot, crumble sausage into pan. Keep an eye on it while preparing the other ingredients.

Prepare slow cooker with cooking spray or a light coat of olive oil.

In a large bowl, whisk eggs and half and half together. You know the drill – beat the bejeebers out of the eggs so they’re nice and fluffy. Add salt and pepper to taste and beat again. 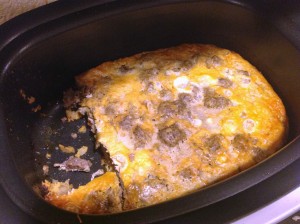 Somewhere around here, the sausage should be done. (You were keeping an eye on it, right?) When it is, drain it to get rid of excess grease, then layer it over the hash browns. They’re in the slow cooker, right where you left them. How much have you been drinking tonight? Just put the sausage on top of the potatoes.

Spread the grated cheese over the sausage. Yes, it’s all still in the slow cooker. (face-palm)

Using a really big spoon, mix everything up well. Now is the time for all the ingredients to meet all the other ingredients and get to know each other. Kind of like you and all those people that showed up that you don’t even know.

Now, pour the egg mixture over everything else.

Set slow cooker to LOW and go to bed. In six to eight hours, you’ll have breakfast waiting for you.

Wait! Before you go to bed, clean up the kitchen, and let the cat out of the refrigerator. If you don’t do both now, it’s going to really mess up your morning.

If you prefer breakfast potatoes (diced, not shredded like hash browns), feel free to substitute those. In fact, you can use tater tots if you want. Just make sure you put some potatoes in there.

I prefer the regular sausage for this recipe, but feel free to try sage or maple flavored, or the hotter versions. 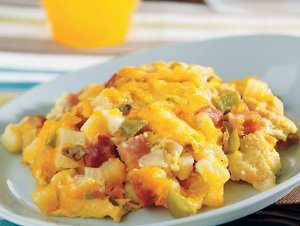 For cheese, I like to use something other than straight cheddar, but you could certainly use that, too. My favorites are Mozzarella and the Italian blend. But that’s just me! Give your creativity free rein and choose your own favorites.

This recipe makes enough to feed four to six people, depending on appetites. If you’ve got a larger slow cooker, you could easily double or even triple the recipe.

There are many variations on this theme, and you should feel free to try them. Think of it this way, if you would put it in an omelet, you can put it in here. For instance, you could substitute tortilla strips for the hash browns, and add some diced chiles or jalapenos, some onion and some salsa (green or red), and you’d have a Mexican version. Opt for ham instead of sausage, use Swiss cheese and some green onions and you have a Quiche that you don’t have to call by name. Substitute cubes of bread for the hash browns and you’ve got a slow cooker strata. I’m betting you can think of other ideas if you try.

Next time you want to feed a troupe of people without much hassle, try this one out. Make sure to come back and leave a comment on how it went. And if Phil found is keys.

Until next time, remember, if you want to have fun in the kitchen, you need to: