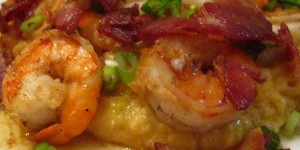 Unless they’re from the South themselves, a lot of folks think we all eat the same stuff. Boy, are you in for a surprise! For instance, just in the Carolinas, there are several very different types of barbecue sauce, including a mustard sauce that looks yellow, and a thin orange sauce with lots of vinegar that’s amazing on pulled pork. Houston may be right down the road from Nawlins (New Orleans to the rest of the world), but the cuisine could just as easily be from different planets.

I’m telling you this because of the recipe I’m sharing today. You see, although I’m seventh-generation Texan on both sides of my family, and I’ve lived in various parts of the South throughout my life, that doesn’t mean I know everything there is to be had from Southern cooks. Such is the case with today’s offering. Shrimp and grits? On the same plate? You can’t be serious!

Turns out they are serious – at least in Nawlins and the surrounding country. I discovered this treat in Charleston, South Carolina in 2011, while on tour in that area. Before then, I’d have barbecued shrimp done several ways – even with a tomato-based sauce. And, sure I’d had grits – but for breakfast, either with salt, pepper and butter, or butter and honey – which will just flat-out amaze you, even if you’ve had grits before. Turns out, however, that the original idea came from Louisiana, and that’s where it appears to have been perfected. This recipe is based on that.

I’ve got to say, if you’ve never had cheesy grits, you’re in for a treat right there. Do them right and they’re creamy and smooth and just melt you when you taste them. But then, you’ve got the shrimp – which I LOVE! – and that great Cajun spiciness to contrast the grits. It’s so good it’s scary! Let’s go have some fun before I explode, OK? 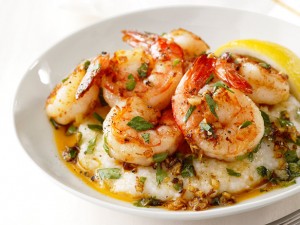 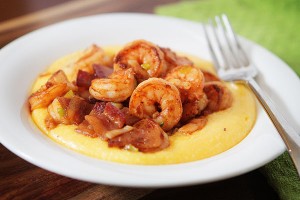 First, get everything together:

Mince the Tasso ham. Chop the onion (about medium). Mince your garlic. Measure everything out. Rinse, peel, and devein the shrimp (unless it’s already done). Rinse again and pat dry with paper towels. Now, you’re ready to cook.

Heat a large skillet over medium-high heat. When hot, add olive oil and heat until it shimmers.

Saute the Tasso about 2-3 minutes, or until edges begin to brown a little.

Add garlic and saute another minute.

Add shrimp to pan and sprinkle Cajun seasoning over the top. Cook for a minute or two (depending on size), then turn for another minute or two.

Add 1/4 cup water to skillet. Scrape the bottom to free up any browned bits of goodness. 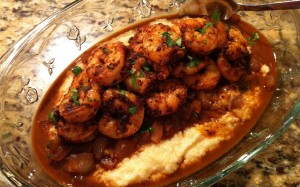 Remove pan from heat, and add butter and stir everything around until butter melts. Cover skillet and set aside, and let the shrimp get to know everything else and get happy. Meanwhile…

Bring half and half, salt and water to boil over medium-high heat.

When it boils, reduce heat to low and add grits a little at a time, stirring constantly with a whisk as you do so.

Continue to stir as you cook the grits until they’re nice and thick, and bubbling away happily. This should take about five minutes.

When grits are ready, remove from heat and stir in the shredded cheese.

Divide grits among 4 or six plates (depending on appetites). Top with shrimp in the center, then spoon some ham and onions over them, covering the center of the grits. Sprinkle a little cheese over each plate (just a little!) and a few green onions. Remember that people taste first with their eyes, so make it pretty!

Tasso ham can be hard to find if you’re not in Louisiana. Feel free to substitute chopped bacon and a few drops of Liquid Smoke instead. 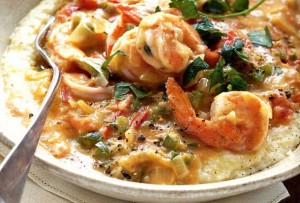 As for the Shrimp, figure about a quarter pound for the average appetite, a third of a pound for hungrier folks, or if serving as the main course. I like to use really big, fat, juicy, awesome HUGE shrimp, but you can do large, or even medium, if you prefer. Also, if you’re doing this as an appetizer, remember to not put too many grits on the plate or you’ll fill your guests up before you get to the main course.

If you’re doing this as your main course, let me suggest sauteed kale, spinach or other greens as your side.

There are a few ways to alter this recipe depending on your taste. For starters, you can use skim milk in the grits, although they won’t be as creamy. In fact, many restaurants use cream to make it even… creamier. (Yeah, I know, but how else to describe it?) If I happen to have cream on hand, I’ll use up to a half cup of that in place of some of the half and half. I’ve also been known to add a tablespoon or two of butter at the very end. You can also use low-fat cheese to reduce calories. For myself, I prefer to do the full-fat, full-flavor version and eat less, but that’s just me!

If you prefer, you can substitute barbecued shrimp done one of many ways, for the shrimp recipe here. I know I’ve done it! But I do encourage you to try this recipe first, as it’s the original.

Next time you’re in a Mardis Gras mood, try this one out and see if you don’t let out a nice “Aaaaayeeeeee” like my Cajun friends do. And don’t forget to leave me a comment, OK? Of course, have fun, and…

I have more Seafood Recipes here.